Have you ever thought of kicking a specific logged in user out of their session (for some weird reason).

If you are using devise for authentication then the short answer is no/yes. Read through the rest of the the post for explanation or scroll to the last for a hacky way.

I tried many ways to hack around to fool devise into thinking that the user session is expired but no luck. The user session cannot be accessed by other users (like from the rails console or database level).

The closest i thought I came is to trick the Timeoutable  hook. But it depends on last_request_at which is taken from the user session.  I tried messing with db fields like

current_sign_in_at, last_sign_in_at but realized that devise does not look at these fields once the user logs in.

Over all, the conclusion is that we can’t mess around with Devise which does its job well.

Note: You can still clear all the sessions for all the users using the following ways, depending on where you stored the session :

Update: Hacky way: After all this efforts I found out that we don’t even need to break our head to crack devise. Just change the `password` of the `user` from rails console and that will log him out.  I called it a hacky way as the user can not login again with previous password (can revert it back to normal after logout though).

If you ever encountered this error probably you are trying to add/access a I18n key for a `enum` attribute. For example if my model has a `enum` value like below.

If we want to internationalize the `values` as

. In your en.yml you need to specify as below.

I18n expects the name of-the field as the first key/value.If you forget that then you see this error. Happy coding!

In Object Oriented Programming calling constructor is the first step of initialization an object. There are 2 types of constructors – default and parameterized.

Default – Constructor that take zero argument is called Default Constructor. Every class needs a default constructor. A default (no-argument) constructor is automatically created only when you do not define one yourself.

They can be added as per our requirement.

When you declare a parameterized constructor you must add default constructor as java stops creating one.

There are 2 steps involved in configuring postgres sql data base to a spring boot application assuming we already have data base setup.

2. We need to tell Spring container to look into postgres by changing the application.properties.

So the list of possible options for ddl-auto are

I added spring.jpa.properties.hibernate.jdbc.lob.non_contextual_creation=true as the server is throwing following warning while startup.

Now restart server and you should see successful db connection logs. When the connection is successful spring container tries to validate the entities in the project to the db tables.

For example if i have a hstore column like below

the validation looks this. as enum doesn’t work with hstore key well.

see you next time!

Difference between spring annotations @RestController and @Controller is

Both are used to indicate spring container that it is a controller stereotype but for @RestController it returns domain object instead of a View.

In Java the program always starts with a main method. Ruby program by default creates a main Object which is an instance of class class and then starts execution on it(weird!). It always starts reading from the first line of the file, there is no specific starting point.

So when you create a ruby test file HelloWorld.rb with below statement

execute it in terminal with ruby HellowWorld.rb . Ruby interpreter creates main object and then starts to execute puts.(puts is an instance method from kernel module. These methods are called without a receiver).

To test this go to terminal irb and do the following.

Java is a compiled language so the execution is a 2 step process. compile + run.

Ruby is an interpreting language.

Both Java compiler and Ruby interpreter are written in C.

Ruby is completely object oriented what does that mean from a java perspective ?

– In java we have primitive data types such as int, float etc along with Classes and Objects. In Ruby Integer, Float etc are also Classes inherited from Numeric class which intern inherited from Object class. here is a detailed image taken from rubylearning.com which explains this.

So when you create an Integer in ruby you are creating a object for Integer class.

One more important ruby feature to discuss is duck typing.

Java is strictly or strongly typed language where we need to declare the type of variable. 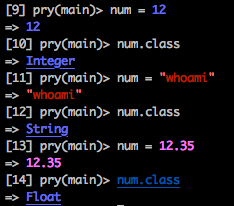 Ruby is loosely typed language where it tries to define the type of a variable implicitly as shown above. If it can not infer it it throws an error as below.

Explicit conversion is kind of ruby’s way to type safety. I can try to convert into my expected type. see below.

Ruby symbol and string does the same thing except symbol is more efficient in terms of memory and time.

A Symbol is the most basic Ruby object you can create. It’s just a name and an internal ID. Symbols are useful because a given symbol name refers to the same object throughout a Ruby program. Symbols are more efficient than strings. Two strings with the same contents are two different objects, but for any given name there is only one Symbol object. This can save both time and memory.

Therefore, when do we use a string versus a symbol?

We can change them to each other like this

Symbols are particularly useful when creating hashes and you want to have a distinction between keys and values.

No. Thats true in Rails world as rails there is a convention how you should define classes and file names. Rails uses this convention while loading the classes. A class named UserRegistration should reside inside a file named user_registration.rb. This is a standard convention that rails follows otherwise rails won’t be able to load the class.

Squash them after a period of time.

In Production it makes sense to have IrreversibleMigration as the code is tested in lower environments. If there is an issue try to fix it with a follow up migration.

Note: If there is a new developer in your team and setting up their environment. Let them do `rake db:schema:load` to get latest db copy.